Homepage NewsExhibition " Amber and its imitations"

Exhibition " Amber and its imitations"

Baltic amber (succinite) is a fossilized tree resin from the Paleogene period, which is about 40 mln years old.

It is found only in a relatively small area of Central Europe (Baltic coast, Kaliningrad region, glacial sediments that carried amber into the depths of Poland and others), which makes it a rare and relatively expensive. We also find the same kind of fossilised resin in Ukraine (Ukrainian amber) and in German Saxony (Bitterfeld amber).

The uniqueness and high price of amber caused the search for substitutes of amber and replacing it with cheaper ones and more easily accessible imitations: natural young ones modified resins and synthetic resins.

The oldest known imitations of amber are imitations of coloured glass. However, currently, this method is much more difficult to produce and has been supplanted by imitations from synthetic resins.

At the beginning of the 20th century, synthetic resins such as bakelite, resol were used on a massive scale as an imitation of amber and novolak (phenol). Demand in the first half of the century the amber was high, and the society poor also these imitations have become very popular and often today appear on the collector's market as amber.

Currently, the most common imitations of amber there are imitations from synthetic resins, among others such as resin epoxy, polyester (alkyd) and others.

Copal is a natural, young subfossil resin. Is estimated, that copal can be from several hundred to about 1 million years old. Occurs in the southern hemisphere (Colombia, Madagascar, Congo). Most often in imitations of Baltic amber, modified Colombian copal is used.

The Gdańsk Amber Laboratory MSB examines and certifies amber products. The ability to distinguish amber from his imitation is an important asset of the Gdansk centre. One of the important tasks is also to run a collection of imitations for educational purposes. 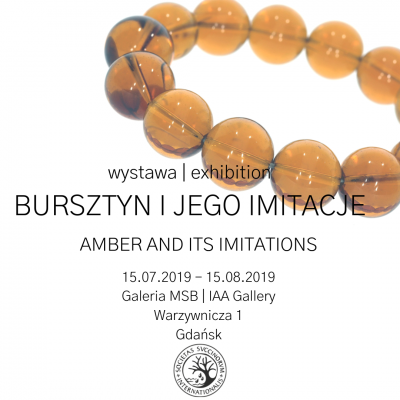